The capture of heavy metals and semi-volatile organic compounds can be carried on simultaneously with the acid gas capture or in a second stage by the injection of lignite coke or activated carbon.

Dry scrubbers are used mainly to remove acid gases from combustion sources. Generally, this is done by introducing a series of dry reactants to exhaust gas at high speeds. This neutralizes the pollutants in the gas. This task is done in three steps: gas cooling, reagent injection, and filtering.

First, gas cooling must be done to prepare exhaust gases. In the gas cooling system, emission gases are cooled to make it easier to remove pollutants and other toxins from the gas. The exhaust gas is diluted using an evaporative cooler. Once the gas has been significantly cooled the reagent injection can begin. It is in this step that the harmful components are actually removed from the gas.

Components of the dry reagent are generally chosen because of their neutralizing properties – thus sodium bicarbonate is frequently included. A variety of powders are mixed together and fired at high pressures into the exhaust gas.

Chemical reactions occur that reduce the acidity of the gas and remove harmful pollutants. The final step is using a dust collector to capture the used scrubbing powder as the cleaned gas exits the scrubbing chamber.

This spent powder can sometimes be cleansed and reused for dry scrubbing, but frequently it must be disposed of since it cannot be properly washed.

There are two designs for dry scrubbers. The difference is in the dry absorber design. For the first type, the dry absorber utilizes a fluidized bed—either bubbling bed or circulation bed. The bed of the absorber is initially charged with reagents. The combustion product gases, laden with acid gases pass through the reagent bed where the absorption and chemical reactions occur to remove the acid gases. Then, the combustion product gases, the reagent, and reaction products enter a bag house filter where cloth filters allow clean air to pass through while the solids are captured and fed back to the absorber, or removed for discharge. The majority of reagents are recirculated back to the absorber with only a small portion discharged continuously with the absorbed products. Raw and fresh reagents are charged continuously to the absorber to compensate for the discharge losses. The absorber provides the first stage removal of acid gases while the reagents coated on the filter bags provide the second stage of the acid gases removal. The reported sulfur dioxide removal efficiency can be as high as 98% (Zwers, 2011). Although this type of design has high removal efficiency, the high initial capital costs and the operation complexity limit its application.

The second design utilizes a reagent injection system to inject the reagents directly into the combustion product gas stream, either in a separate chamber or in the hot gas duct. This design provides utilization of reagents once. The reagents coated on the filter bags are the only removing mechanism for acid gases removal. Compared with the first design, the efficiency is lower and the reagent wastes are higher. However, the initial capital is much lower and the operation is much simpler. 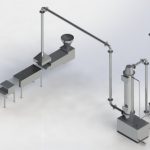 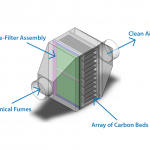 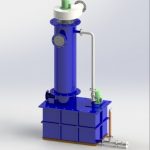 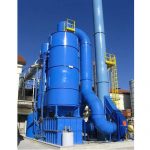 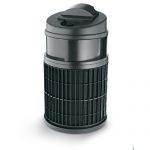 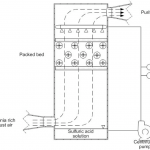 We introduce ourselves “DRIZGAS TECH” as an organization, committed to provide quality product and services for air pollution control with excellent performance.

We help to investigate the pollutants sources and ventilation systems, controlling the harmful chemicals using effective treatment, and to maintain the air quality level to be safe for workers at indoor environment. Our solutions are to ensure good air quality at indoor environmental condition and protecting workers at the same time. We also address the potential problems reported by workers in the indoor.