Laboratory fume hoods are designed to shield laboratory users from vulnerable to hazardous materials. Fume hoods provide a secure, enclosed work area for chemical usage and allow acute ventilation for the user and laboratory. Fume hoods should be used when working with or potentially producing a substance that integrates a threshold limit value (TLV) of less than 50 ppm. Fume hoods are typically the most effective method of protection when working with flammables, corrosives, water reactive chemicals, and pyrophoric materials.

A laboratory chemical fume hood is a partially enclosed workspace that is exhausted to the outside of the building. When used properly, hazardous gases and vapors generated inside the hood are captured before they enter the breathing zone. This serves to minimize your exposure to airborne contaminants.

There are many types of hoods, each with its own design and function. The main type of fume hoods classified based on its function are:

Constant Air Volume (CAV) Hoods: With constant volume hoods the volume of airflow into the hood remainsconstant. As the sash is closed the velocity of the airflow entering the hood increases. Properpositioning of the sash is vital to maintaining the optimum face velocity, 80 or 120 feet per minute. Raising thesash too high lowers face velocity, allowing contaminants to escape from the hood. Setting the sash too low willresult in very high face velocities. Face velocities in excess of 120 feet per minute can cause excessive turbulenceand loss of containment.

Variable Air Volume (VAV) Hoods: To overcome the drawback of constant air volume fume hood, Drizgas Tech has developed a new version of fume hood based on its function, Variable air volume hoods. The variable air volume hoods are the most sophisticated of the hoodtypes, requiring technically proficient design, installation and maintenance. The primary characteristic of VAVhoods is their ability to maintain a constant face velocity as sash height changes. As the sash is moved the exhaustvolume is adjusted so that the average face velocity is maintained within acceptable parameters. It is bestto use this type of hood with the sash in the half-open position, as this provides more even airflow, and a degreeof face protection in case of an unexpected spill, fire or explosion in the hood. When not in use the sash shouldbe closed to save energy.

Different type of fume hoods classified based on application 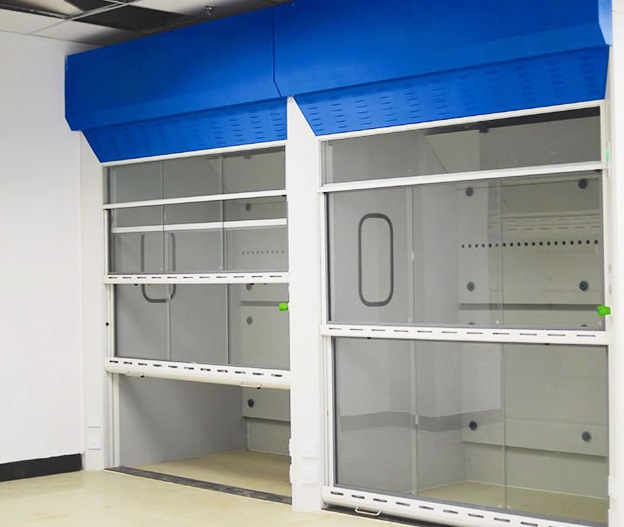 We introduce ourselves “DRIZGAS TECH PVT LTD” as an organization, committed to provide quality product and services for air pollution control with excellent performance.