A scrubber is a waste gas treatment installation in which a gas stream is brought into intensive contact with a liquid, with the aim of allowing certain gaseous components to pass from the gas to the liquid. Scrubbers can be employed as an emission-limiting technique for many gaseous emissions. Scrubbing is also referred to as absorption. 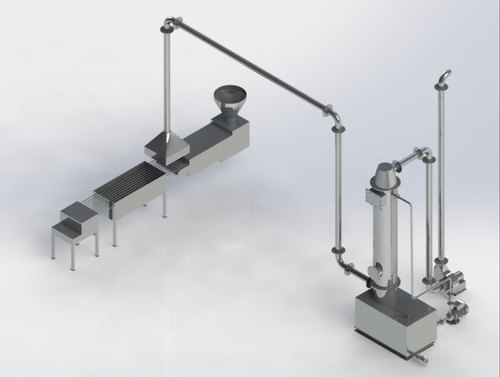 This allows one to calculate the maximum concentration of a particular component in the washing water, for the required end concentration. This also gives an indication about water usage under those circumstances.

Besides water (wet scrubbers), organic liquids are also used as absorption mediums. In many cases chemicals or micro-organisms are added to the scrubbing liquid to convert or neutralise gases that are dissolved in the liquid (conditioned scrubbers). As a result of this conversion, the concentration in the water is reduced, which in-turn allows more gas to dissolve (according to Henry’s Law).

The concentration of polluted substances in out-going gas streams can never become lower than that permitted by the equilibrium between the gas phase and the scrubbing liquid.

In practice, a scrubber consists of three parts: An absorption section, a droplet collector and a recirculation tank with pump.

We introduce ourselves “DRIZGAS TECH” as an organization, committed to provide quality product and services for air pollution control with excellent performance.

We help to investigate the pollutants sources and ventilation systems, controlling the harmful chemicals using effective treatment, and to maintain the air quality level to be safe for workers at indoor environment. Our solutions are to ensure good air quality at indoor environmental condition and protecting workers at the same time. We also address the potential problems reported by workers in the indoor.